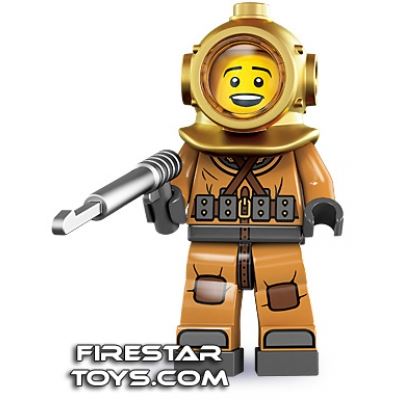 “There’s always something new another hundred fathoms down.”

If he could, the Diver would spend his entire life beneath the sea. He’s a born explorer, but instead of climbing mountains or looking for lost valleys, he’s dedicated his life to plumbing the ocean depths in search of new discoveries and the answers to old mysteries.

Thanks to his weighted belt and boots, he can spend countless hours wandering through deep-sea trenches (as long as someone up top keeps pumping air into his diving hose) or hunting for shipwrecks (which aren’t hard to find when the Pirate Captain is around). He isn’t afraid of sharks or giant squids. Even the grumpy Ocean King considers him a friend, and has been known to ask the Diver to take care of his pet catfish when he goes out of town. To the Diver, the deep blue sea is the real final frontier!