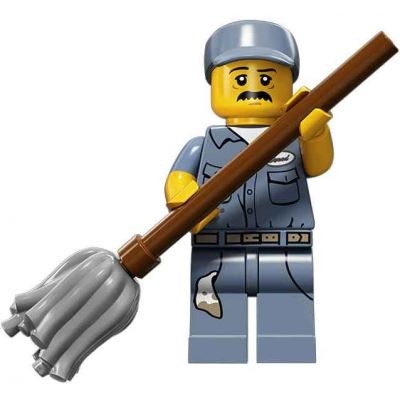 “I’ve got something here that’ll clean that right up.”

Nothing fazes the unflappable Janitor. In the face of spills, stains, and other scenarios much too awful to name, he and his mop are ready to take on every cleaning challenge, whether it be at school, at the office, or even at the zoo. And if a mess should prove too tough for his mighty mop…well, that’s what a dependable old rag and a pocketful of sawdust are for.
The Janitor has been at this job for a long time. In fact, those who know him would swear that he’s been around pretty much forever. For some reason, though, nobody seems to remember his name. It’s especially weird because it’s written right there on his uniform, even if it’s just a little bit hard to read. It’s a good thing he just shows up where he’s needed, without anyone having to call!