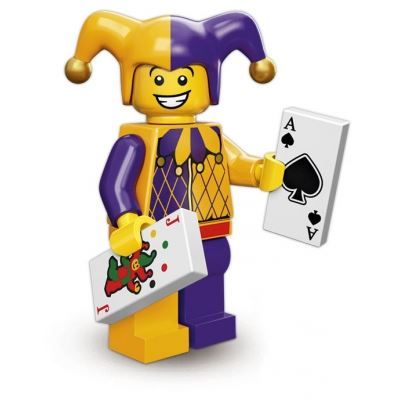 £9.95
Earn 9 StarPoints when you buy this item! Find out more about Star Point rewards here
LEGO CMF Series 12
£9.95
Sorry this item is out of stock
Share: Facebook Twitter Pintrest

The ever-jolly Jester just can’t keep himself from laughing at his own jokes. He’s a pro at puns, riddles, tongue-twisters and card tricks, but as much as his audience may appreciate his wacky wisecracks and medieval celebrity impressions, he appreciates them even more. He can’t even get through a simple knock-knock joke without bursting into peals of laughter before he gets to the punchline.

It’s hard to be funny all the time, but the Jester makes it look easy. Everything he sees – and says – tickles his funny bone until he’s left giggling, guffawing, chuckling, chortling, and rolling around on the floor during each performance. And once he gets going, the King, the Queen, and the whole royal court can’t help but join in the fun and laughter, too!