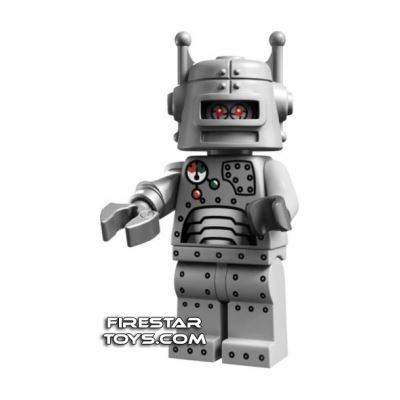 “Not building does not compute!”

With his powerful metal body and mighty claws, the Robot may look tough, but what he really loves to do is build, build, build! Constantly clanking, beeping, whirring and sending out jets of steam, he works tirelessly day and night, searching out spare bricks wherever he can find them and stacking them together to create the biggest, tallest and most incredible structures that you can possibly imagine. In fact, he loves constructing things so much that sometimes he forgets to recharge his circuits and freezes in place, right in the middle of building.

He’s slow to react to things that he doesn’t expect, and prone to occasional short-circuits, with a tendency to walk right into holes, spin around suddenly in place or crash through walls without even noticing. He also has a bad habit of “finding” bricks in other people’s creations and marching off with them, right over or through any obstacles in his way, but don’t blame the Robot – it’s just his programming!

Visit our LEGO Parts section for a great range of Accessories, Parts, Weapons and more...