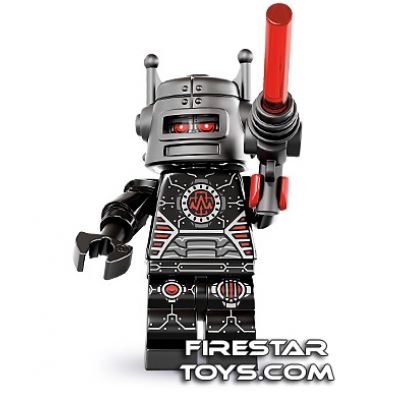 “Not computing does not build!”

Everything that the Robot does, the Evil Robot tries to do the opposite. If the Robot spends all his time seeking out bricks and building giant towers out of them, then the Evil Robot dedicates himself to taking them apart and scattering the bricks everywhere – under beds, inside shoes, beneath fridges and anywhere else they’ll be hard to find.

The Evil Robot’s single-minded drive to be the Robot’s opposite does have certain flaws. Since the Robot walks forwards, the Evil Robot is determined to walk backwards everywhere he goes. The Robot is a hard worker, so the Evil Robot tries to be as lazy as possible. Despite all this, villains keep recruiting him to help out with their bad-guy schemes. It’s probably because he looks so cool, but they usually learn pretty fast that having an evil robot on your side isn’t always as useful as it sounds!