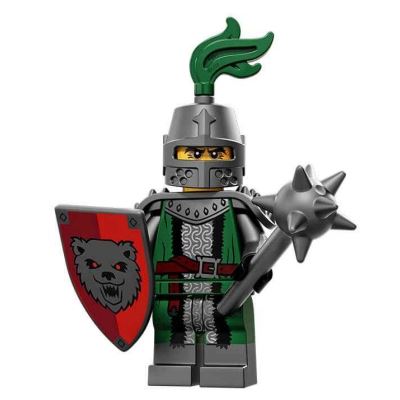 The Frightening Knight is very, very scary. No one is quite certain just what makes him so scary. Maybe it’s his gravelly, growly voice. Maybe it’s his scowling expression, or his intimidating armor and helmet, or his spiky morning star weapon, or the angry-looking bear on his shield. Or maybe he just smells scary somehow.
Being frightening isn’t just the Frightening Knight’s name – it’s also his great passion in life. If he doesn’t leave everybody who sees him shaking in their boots, then he feels like he hasn’t done his job right. All the bad guys agree that he’s pretty much the scariest Minifigure around. Even the legendary Fright Knights kicked him out for being just too scary. He could probably be a little less scary if he tried…but why would he ever want that?