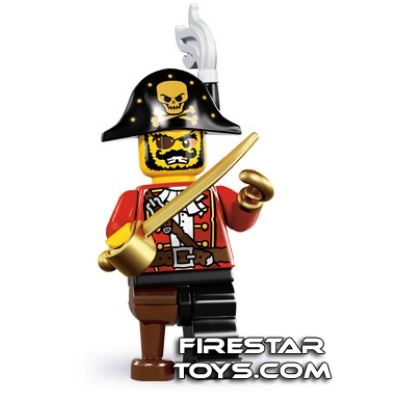 “Yarr! Don’t ye know who I be? And if not, do ye have any suggestions?”

A real pirate is a merciless, rotten son of a sea dog, and that’s exactly what the Pirate Captain aspires to be. He certainly looks the part with his rugged eye-patch, hook-hand and peg-leg, but he has to admit that he’s had a few hiccups along the way.

First of all, his ships keep sinking. No matter whether it’s a man o’ war or a dinghy, any vessel capsizes within five minutes of him coming aboard. Also, he gets seasick really easily – sometimes just a picture of the ocean is enough to set him off. Worst of all, he’s having real trouble coming up with a piratey name. All the good ones – from Ironhook to Brickbeard – seem to already be taken. If he can just come up with a name to strike fear into the hearts of landlubbers everywhere, the Pirate Captain figures the rest of his problems will solve themselves!