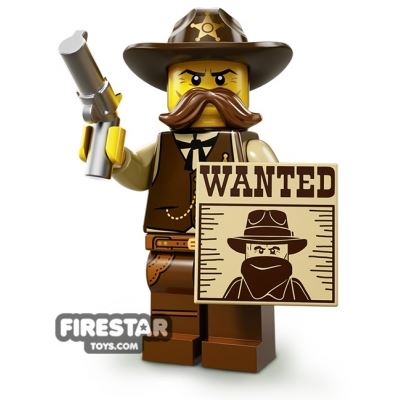 The Sheriff is out to lock up every last outlaw in the Wild West. With a shining badge on his chest and a six-gun by his side, he’s captured card sharps, rounded up rustlers, and busted badmen by the dozen. Now there’s only one most-wanted minifigure left for him to catch: the notorious varmint known as the Bandit.

From town to town the Sheriff rides, scouring every saloon, stable and outhouse for his slippery foe. So far, the Bandit has always managed to stay one step ahead, but the lawman knows that it’s just a matter of time until his quarry slips up and he hauls that crooked cowpoke off to jail. And on that fateful day…the Sheriff’s LEGO® Minifigures collection will finally be complete!